Blancpain – one of the oldest luxury watch brands in the world

Blancpain Brand Review By Alexander – Founder and Owner of swissdiverswatches.com

A Review of Blancpain’s history 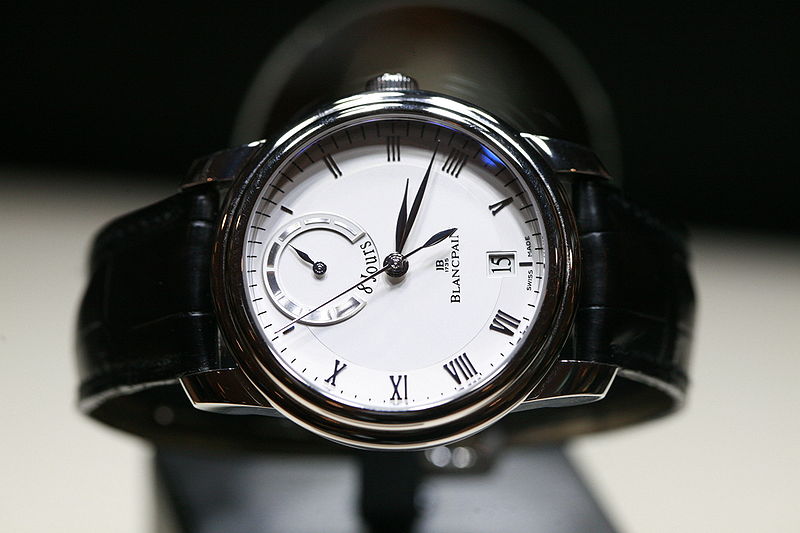 The headquarters of Blancpain is to be found in Biel, Switzerland and the watch manufacturer is nowadays wholly owned by Swatch Group.

In 1735, Jehan-Jaques Blancpain saw the potential of a new industry – watchmaking, and established the Blancpain brand, and started setting up a workshop in the upper floor of his house in Villeret Switzerland.

In 1815, the great grandson of Jehan-Jaques Blancpain – Frédéric-Louis Blancpain, who headed the Blancpain family watchmaking business, decided to transform Blancpain from a traditional workshop of craftsmen into an industrial business capable of larger and massive production. Frédéric-Louis Blancpain came up with the idea of replacing the crown-wheel mechanism with a cylinder escapement mechanism. This was a major innovation in the horological industry.

By the middle of the 19th century, Blancpain had become the most prominent company in Villeret.

In 1926, Blancpain started a partnership with John Harwood, and with that partnership Blancpain began marketing the first automatic wristwatch – that is a watch powered by your hand – and arm movements – which is the normative type of watch movement among higher end Swiss luxury watches.

In 1932, the Blancpain family’s management of the firm ended due to the fact that the owner of the company – Frédéric-Emile Blancpain – passed away that year, and his only daughter Berthe-Nellie had no interest in the watchmaking industry.

For that reason, Betty Fiechter and André Léal – Frédéric-Emile Blancpain’s closest staff associates, decided to purchase the company, and for legal reasons had to rename Blancpain The Villeret Manufacture into Rayville S.A., succ. de Blancpain – “Rayville” being a phonetic anagram of the name Villeret. The name of the brand was changed but the brand’s identity was not.

Until 1950, Betty Fiechter remained the director of Blancpain when her nephew Jean-Jacques Fiechter decided to join her, and together they gave Blancpain new energy and new management.

In 1953, the French navy’s “Combat Swimmers” needed a good and reliable divers watch for their operations, and the co-founders of the unit – Captain Robert “Bob” Maloubier and Lieutenant Claude Riffaud, approached and requested Blancpain’s CEO – Jean-Jacques Fiechter to produce a divers watch for them. Blancpain’s CEO Jean-Jaques Fiechter accepted their challenge, and in 1953, the legendary Blancpain Fifty Fathoms, was produced.

Ever since 1953, Blancpain Fifty Fathoms has been a benchmark or reference for divers watches.

The Swiss watchmaker’s success continued. In the late 1950s, Blancpain manufactured a number of watches exceeding 100,000 per year.

In order to meet the market’s growing demands, Blancpain became a part of “Swiss company for the watch industry” (SSIH), and joined brands such as Lemania, Omega and Tissot, and by 1971, production exceeded 220,000 watches per year.

In the 1970s, the quartz crisis started, and many manufacturers of automatic and mechanical watches saw themselves out of business. Due to the falling value of the US dollar and decreased transatlantic trade and exports and the 1973 oil crisis, a global recession was provoked.

On January 9th 1983, due to financial difficulties – “Swiss company for the watch industry” (SSHI) was forced to reduce its production by half, and sold Rayville-Blancpain to Frédéric Piguet’s son Jacques Piguet – (who was the director of a company named after his father – Frédéric Piguet), and to SSIH employee Jean-Claude Biver.

From that point of time, Blancpain moved its production to Le Brassus in Switzerland, and the name of the company changed into Blancpain SA.

When Blancpain got new owners, the brand decided they would no longer provide their competitors with their in-house made movements – Blancpain would keep its expertise in its exlusive possession, and despite the popularity of quartz watches, Blancpain would stay true to its tradition of manufacturing mechanical watches and grande complications, in the spirit of the founder Jehan-Jacques Blancpain.

Blancpain is particularly proud of Blancpain 1735, which is an embodiment and a good example of what fine watchmaking and old fashioned artisanship are all about.

Blancpain 1735 is equipped with a flyback chronograph, minute repetition, perpetual date, moon phase calendar and tourbillon – all prominent examples of the level of technical brilliance and virtuosity which you would expect a high end Swiss luxury watchmaker to be able to manufacture.

The Blancpain management decided to manufacture Blancpain wristwatches in an old-fashioned style true to its origins. Blancpain turned to its past for finding its true identity.

In 1992, SSIH purchased Blancpain back, and Jean-Claude Biver remained the CEO of Blancpain until 2003.

Later on SSIH became known as the Swatch Group – which is the current owner of Blancpain.

A Review of Blancpain’s mission

The values of this legendary Swiss brand are: 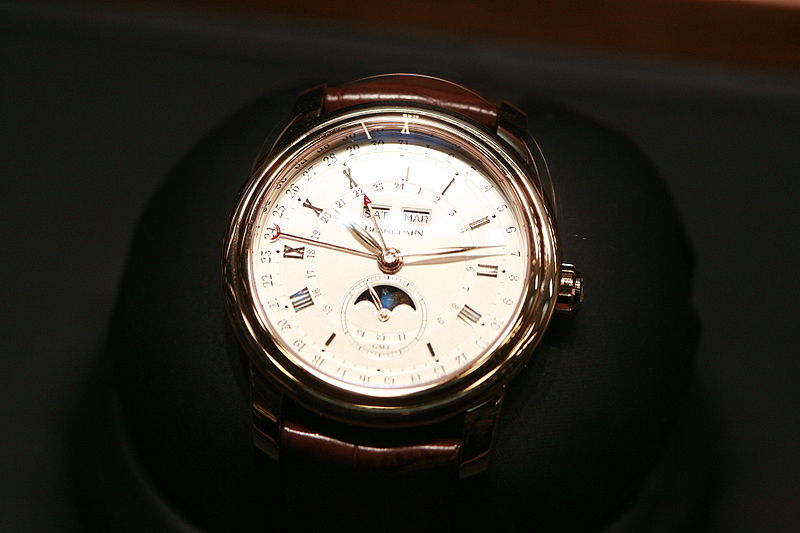 Blancpain hasn’t ever produced a single quartz/battery driven watch, and according to the watch manufacturer itself – it never will.

The purpose of Blancpain is not produce watches in large volumes, but rather to make sure that master watchmakers and artisans, devote their knowledge, expertise and training, in order to spend months and maybe even a full year, to manufacture and assemble each and every Blancpain timepiece by hand.

Blancpain is truly the epitome of old fashioned handmade Swiss luxury timepieces. Ultimately, Blancpain is made by, made for, and meant for connoisseurs. Since every single timepiece is handmade, it means that every single unit is unique and bears the trademark of the individual wathmaker that made the watch.

A Review of Blancpain’s manufacture

Their master watchmakers use watch tools that are by modern standards very rare and they use those tools specifically and exclusively for Blancpain watches!

Their timepieces are faithfully produced in the old-fashioned Swiss watchmaking tradition.

The watches are sold in very few numbers which makes them considerably more expensive than most brands on the market.

Blancpain watches are meticulously, thoroughly and exhaustively examined by professionals to ensure high quality timepieces – which implies resistance against thermal and mechanical shocks and resistance against magnetism. Each watch has to pass several accuracy tests as well.

Blancpain perfects its watches – the brand uses computer software to design the movements of the watch. Combining the art of horology, information processing and micromechanics, a project will normally take 1,500 hours at an average – that’s more than 60 days of work! At the same time, Blancpain remains faihtful to its old heritage that spans more than two and a half centuries.

The homologation of the Blancpain movement is a critical part of the project. The manufacturer uses a computer software program to perform measurement tests in order to:

A prototype needs to pass all the tests in order to become a real Blancpain movement ready for production. Just like “The Holy Trinity” and Jaeger LeCoultre, Blancpain applies rigorous tests testing the watch theoretically even before it becomes a prototype.

Blancpain produces a high proportion of their movements’ components. The manufacturer uses modern machines to cut and produce components of the movements, and the accuracy is equivalent to a micron – that is a millionth of a meter. Blancpain produces its very own tools that only their watchmakers will use.

Despite using modern equipment for manufacturing the components of the movements, each Blancpain movement is assembled by hand.

A Review of Blancpain’s movements

Despite being owned by Swatch Group, Blancpain relies exclusively on its in-house made movements.

A Review of Blancpain’s reputation

Just like “The Holy Trinity”, Breguet, and Jaeger LeCoultre, Blancpain is the epitome of old fashioned handmade Swiss luxury watches with expensive in-house made movements and grande complications – produced by highly skilled watchmakers and artisans.

Blancpain belongs in the category of the top 10 most prestigious Swiss luxury watch brands ever made! As a collector´s item, you simply can’t go wrong with Blancpain!

Two possible downsides to the Blancpain brand, which might make watch enthusiasts slightly question the prestige of the brand, is the fact that:

In terms of prestige, I think Blancpain is either equal to Rolex, or slightly behind Rolex in the ranking list, but unlike Blancpain, Rolex is a commercial giant, fully independent, extremely popular and almost every human being on earth has has heard of Rolex.

By contrast, Blancpain is a commercial midget, and fully owned by Swatch Group, and honestly – outside the company of watch enthusiasts, Blancpain isn’t a very well known brand. Ask anyone on the street and they’ll tell you that they have never heard of this brand before. You’ll find exceptions to be sure, but despite its tremendous history and heritage, this brand isn’t very well known. On the other hand, the very rarity of Blancpain makes it less orthodox and more unusual than the most reputed, well known and established luxury watch brands.

A Review of Blancpain’s ranking

My ranking of Blancpain: 8th.