Zenith Brand Review By Alexander – Founder and Owner of swissdiverswatches.com

A Review of Zenith’s history 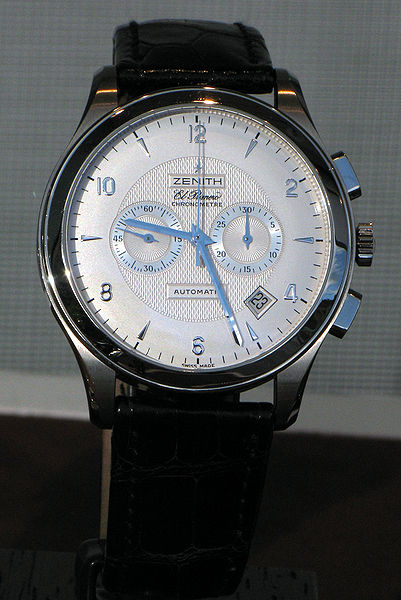 Zenith was established in 1865 by Georges Favre-Jacot, in Le Locle, in Neuchâtel in Switzerland.

In 1999, Zenith was purchased by the French luxury goods conglomerate LVMH (Louis Vuitton/Moët Hennessy) and Zenith has been a subsidiary of that company ever since.

Zenith is still a Swiss brand since its fulfills all the criteria of being Swiss Made. Zenith’s movements are manufactured and assembled in Switzerland and the final inspection of their movements and watches takes place in Switzerland.

In 1865, Georges Favre-Jacot established Zenith, in Le Locle, in Neuchâtel in Switzerland. He united several watchmaking professions under one and the same roof, which was completely unheard of in the world of watchmaking. From the very outset, Zenith took an industrialized and modern approach to watchmaking.

In 1900, the company won the gold metal at the Paris Universal Exhibition.

In 1911, Georges Favre-Jacot formally and officially adopted the name Zenith, referring in a symbolical sense to the highest point in the sky reached by a celestial body. The name would express his desire to reach highest form of excellence in watchmaking.

In 1925, due to its success, Zenith grew as a manufacture and hired more than 1,000 people for its watch manufacture.

In 1948, the Swiss watch manufacturer launched the famous 135 movement that would subsequently earn a staggering 235 prizes!

In 1960, the company launched the famous 5011K movement which at that time broke several precision records!

In 1969, Zenith launched the legendary El Primero movement which is one of the world’s earliest automatic chronograph movements, and the most accurate and precise mass produced automatic movement. El Primero is the only movement capable of measuring 1/10th of a second, and beats at a frequency of 36,000 vibrations per hour (vph).

The honor of being the very first automatic chronograph movement ever made goes to a joint venture by Heuer, Breitling, Buren and Dubois-Depraz, and was introduced on the 3 March 1969. Zenith El Primero was launched only a few months later.

In 1975, Zenith’s new owner decided to limit the company’s production to quartz movements only, as a reaction to the quartz crisis that hit the old fashioned mechanical Swiss watchmaking industry in the 1970s.

Watchmaker Charles Vermot hid all the knowledge of making automatic/mechanical watches, and preserved this knowledge for the future.

In 1994, the Swiss watchmaker launched the ultra-thin automatic Elite movement.

In 1999, Zenith was purchased by the LVHM luxury group, and has been part of that group ever since.

In 2003, the brand invented the “open concept” – meaning keeping a section of the dial open in order to allow the owner of the watch see parts and components of the watch movement inside the watch case.

In 2010, the luxury brand launched the El Primero Striking 10th movement where the sweep seconds-hand could measure one tenth of a second.

A Review of Zenith’s mission

Zenith, driven by an enterprising spirit, is a highly innovative Swiss luxury watchmaker, that seeks to push the limits of technology and watchmaking.

A Review of Zenith’s manufacture

Zenith has a long history of watchmaking dating back to 1865. Zenith has developed more than 600 different movements and has received over 300 patents. Zenith has won well over 2,000 chronometry prizes in accuracy and precision!

80 watchmaking professions can be found under one and the same roof. The El Primero watches, or the El Primero collection (not to be confused with the El Primero movement), take approximately 9 months to manufacture.

Zenith is also one of the very first Swiss watchmakers that produced wristwatches in the early 20th century!

In 1999, Zenith was purchased by LVMH (Louis Vuitton/Moët Hennessy) and is no longer an independent brand. Despite this, Zenith still makes its own movements and relies entirely on its in-house made movements – the Elite and the El Primero.

Elite, which was launched in 1994, contains basic timekeeping functions, such as hour-, minute-, and seconds hands, and a date window.

El Primero, which was launched in 1969, is used for chronographs and complications. In the past, some Rolex watches, such as Rolex Oyster Perpetual Cosmograph Daytona, actually used Zenith’s El Primero movement.

El Primero is also the only mass produced automatic chronograph movement in the world, that beats at a frequency of 36,000 vibrations per hour, which makes this automatic movement unusually fast, and unusually accurate.

Zenith is famous for its complications!

Zenith makes chronograph movements, but does also equip some of their most expensive timepieces with tourbillons, alarms and minute repeaters.

Zenith is the only watchmaker that has made and still makes tourbillons beating at the high frequency of 36,000 vibrations per hour!

Without a doubt, we can say that Zenith is a highly innovative brand that absolutely seeks to push the limits of technology and watchmaking and to see and find technical solutions beyond the horizon.

A Review of Zenith’s movements 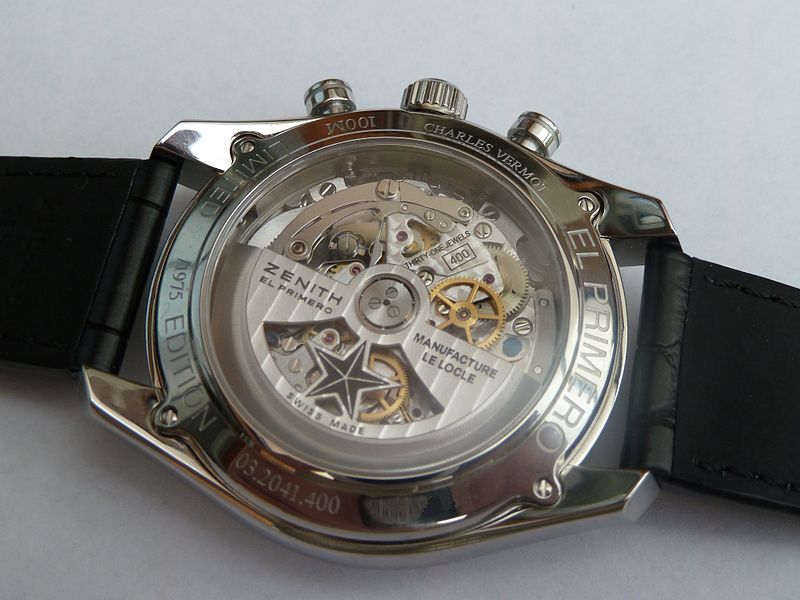 Despite being owned by the French luxury goods conglomerate LVMH (Louis Vuitton/Moët Hennessy):

Zenith’s in-house made movements are automatic, and can be divided into two (2) categories:

A Review of Zenith’s reputation

Zenith belongs to the absolute elite of Swiss luxury watchmakers – no question about it. Some earlier Rolex watches actually used Zenith movements, which is a testimony to the importance of Zenith.

As far as ranking is concerned, I’d place Zenith among the top 10 luxury wristwatch brands of the world.

Zenith’s history dates back to 1865 which makes this an old brand with lots of interesting history.

It’s true that Zenith isn’t the most famous Swiss luxury watchmaker on the market, but the people in the know – watch enthusiasts and connoisseurs, have absolutely heard of Zenith.

Zenith is a high ranking Swiss brand, but is no longer independent:

In 1999, Zenith was purchased by the French luxury goods conglomerate LVMH (Louis Vuitton/Moët Hennessy) and Zenith has been a subsidiary of that company ever since.

Despite being owned by LVHM, Zenith is still very much a Swiss brand since its fulfills all the relevant criteria of being Swiss Made. Zenith’s movements are manufactured and assembled in Switzerland and the final inspection of their movements and watches takes place in Switzerland.

Zenith watches have been used in aviation and in space:

One of the most recent adventures that involved Zenith, was the Red Bull Stratos Mission, in 2012, when the world famous adventurer – Felix Baumgartner, from Austria, made a supersonic free fall jump, in an astronaut’s suit, from an altitude of 39,045 meters/128,100 feet.

He made it successfully to the ground and landed with a parachute. Mr Baumgartner was wearing a Zenith watch on his wrist during his amazing free fall jump.

Zenith makes their own movements:

In similarity to other legendary Swiss luxury watchmakers such as Rolex, Jaeger LeCoultre, and Patek Philippe, Zenith too makes their own in-house made movements. This makes Zenith a member of an exclusive and small club of prominent Swiss watchmakers.

Zenith has two collections of in-house made movements: Elite and El Primero.

Elite, which was introduced in 1994, is famous because it’s an excellent automatic in-house made movement with a 50 hour power reserve. This movement is limited to the fundamental timekeeping functions only: hour-, minute-, and seconds hand, and a date window.

El Primero, which was introduced in 1969, is famous since it’s Zenith’s in-house made chronograph movement. As a general rule, you’ll find the El Primero movement in Zenith timepieces with chronograph functions and complications.

What might interest you, is that in the past, Rolex Oyster Perpetual Cosmograph Daytona, used Zenith’s El Primero as a base movement, for their movements for several years. This is absolutely a testimony to the importance and excellence of Zenith.

Today, in our modern times, Rolex relies entirely on 100% in-house made movements, which means modern Rolex timepieces are no longer utilizing Zenith movements.

“Zenith” means the highest point a celestial body reaches in the sky – and believe me – it’s well named, because Zenith has won more than 2,000 chronometry prizes in accuracy and precision! In all fairness, Zenith is probably more accurate than Rolex, Omega and Breitling – albeit the difference is truly negligible. For daily usage, it really makes no practical difference.

What kind of watches does Zenith offer?

If you want the very best (and extreme) divers watches that Zenith can offer you, you should go with Zenith Defy Xtreme.

Like the name suggests, Zenith Defy Xtreme truly is extreme! In fact – extreme in every way imaginable: You’ll find these watches in the $6,000-$45,000 price range – there is a very large variation in prices.

Several of the models are equipped with a tourbillon – a mechanical device used to counteract Earth’s gravity’s effect on the accuracy of the watch movement – a device only used in extreme luxury watches.

The Zenith Defy Xtreme watches have an open dial, which means you can actually see parts and components of the watch’s beating heart.

The design of Zenith Defy Xtreme is truly unorthodox – resembles nothing of what the more traditional brands such as Rolex, IWC, Omega, Breitling or Jaeger LeCoultre can offer you.

Most Swiss luxury brands use stainless steel. The Zenith Defy Xtreme uses titanium only – which is a considerably more expensive metal, but it’s also a metal of considerably lighter weight.

To conclude, we can say the following about Zenith as a brand:

Due to the very unorthodox design of the Zenith divers watches, these watches are very niche specific – the design doesn’t appeal to everyone. If you know in your heart and mind that you actually want a radically different design, then Zenith absolutely fits the bill.

A Review of Zenith’s ranking

My ranking of Zenith: 10th. 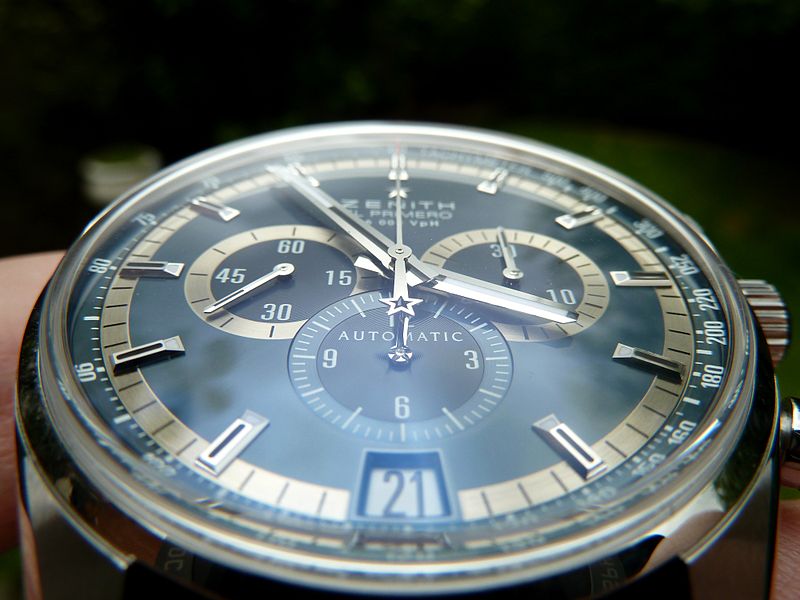