Panerai Brand Review By Alexander – Founder and Owner of swissdiverswatches.com

A Review of Officine Panerai’s history 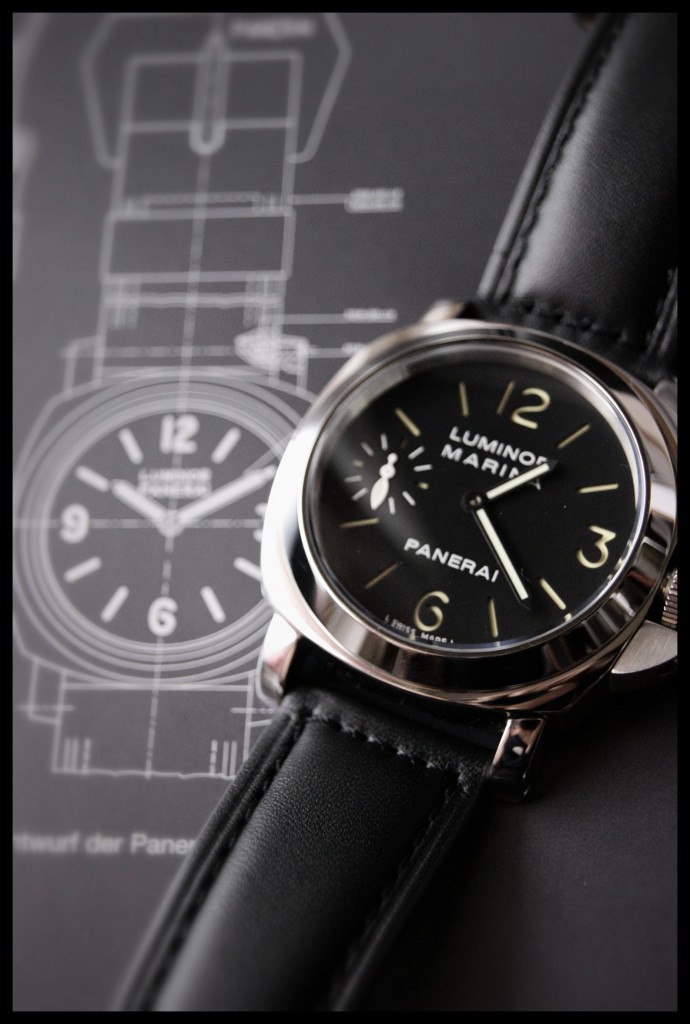 In 1860, Giovanni Panerai established Panerai in Florence – Italy. The official name of the brand is either “Officine Panerai” or “Panerai” – both names refer to the same watch manufacturer and both names are used interchangeably. Panerai is known to have been the official timekeeper of the Italian Navy in the 20th century. The brand combines Swiss technology with Italian design.

Despite using Swiss movements and despite being Swiss owned today by its parent company – the Richemont Group, Panerai was originally an Italian luxury watch brand.

That’s what makes Panerai so special, and makes it a bit different from other Swiss luxury watch brands. Panerai is Swiss – and yet Italian. The watches are manufactured today in Neuchâtel in Switzerland. 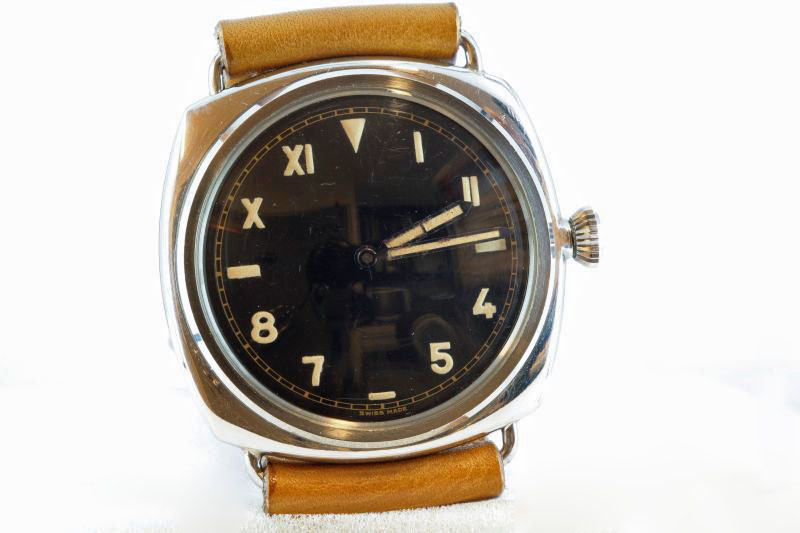 In 1860, Giovanni Panerai established Panerai workshop in Florence in Italy. Panerai functioned as a shop and workshop. Giovannis grandchild Guido Panerai took over the family firm and expanded it at the end of the 19th Century. Guido’s children Giuseppe and Maria took over the family owned company in the middle of the 20th century.

In 1900, the Panerai workshop added the name Orologeria Svizzera to their shop window.

In 1916, Panerai filed a patent on its Radiomir invention – a powder, based on radium, used for the purpose of creating luminescent dials on instruments and devices, used by the Italian Navy. 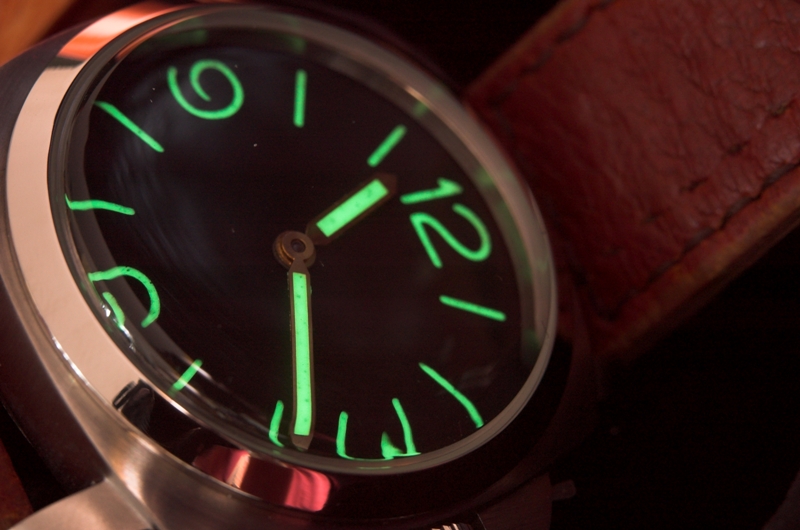 In 1936, the legendary Italian luxury watch manufacturer, developed the first Radiomir wristwatch prototype – a watch with a minimalistic black dial and a brown leather strap. This watch was made for the frogmen of the Royal Italian Navy. 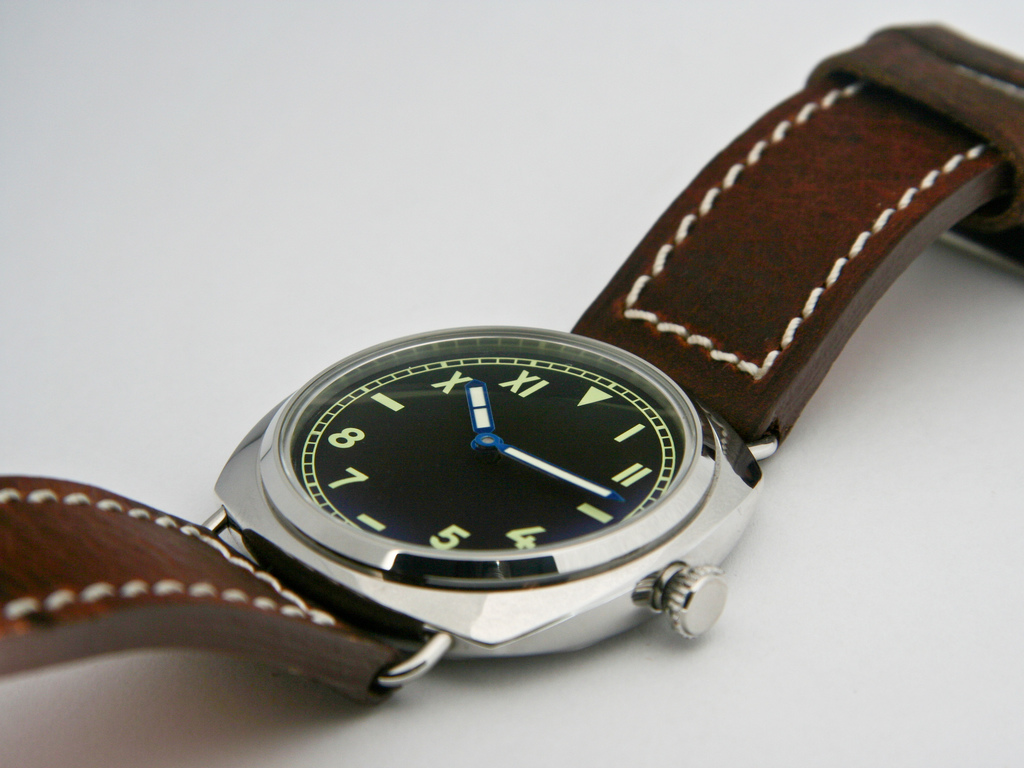 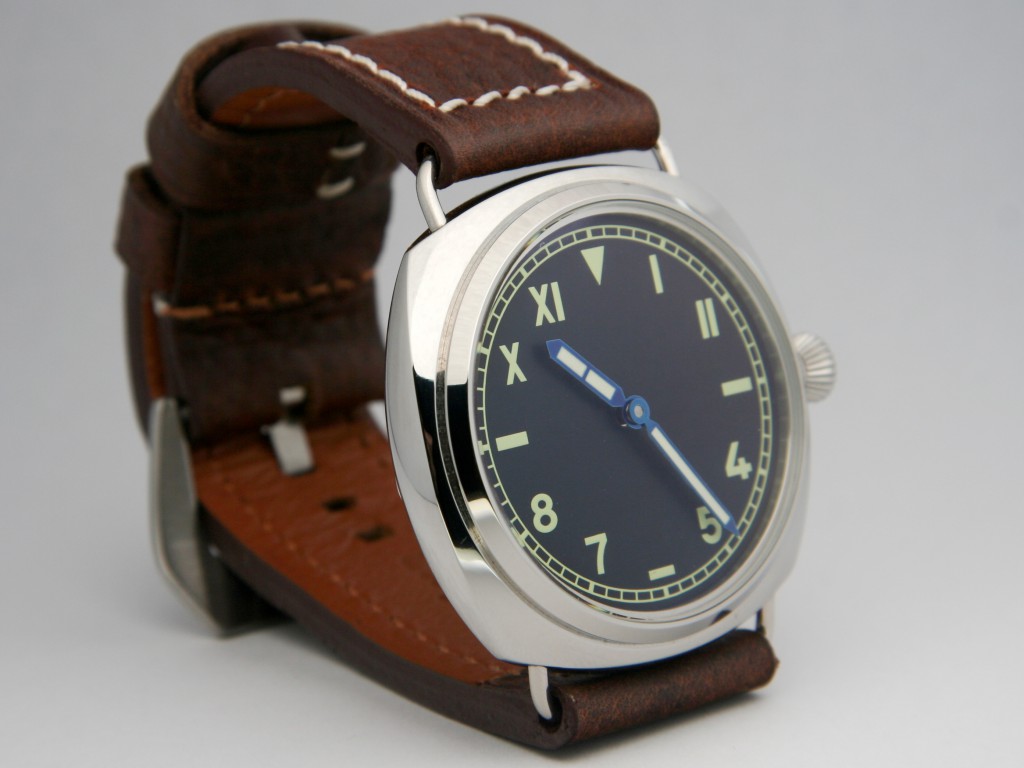 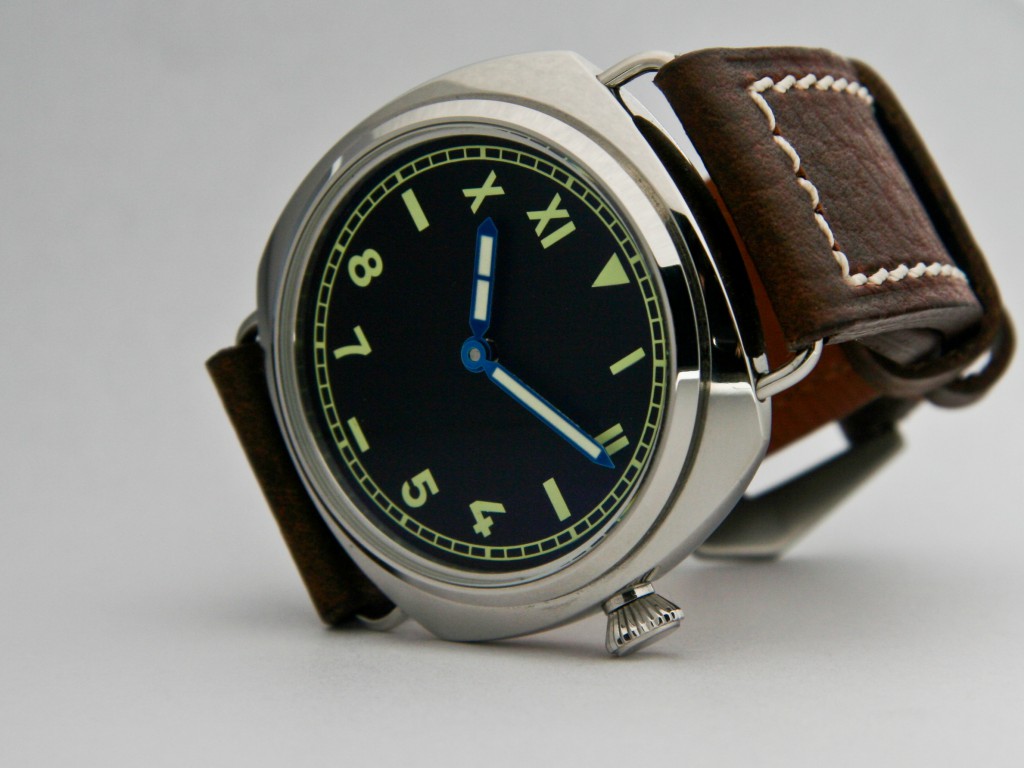 In 1938, Panerai started the production of its Panerai Radiomir watches. They used Rolex movements.

In 1940, the brand improved its Panerai Radiomor Collection because the Italian Navy had very specific requirements. Panerai improved the water resistance of the watch and made it more robust.

In 1943, the company developed the Panerai Mare Nostrum which was a chronograph watch used by Italian deck officers.

In 1949, the watch manufacturer released a new line of watches which would replace Radiomir – the Luminor collection which used another kind of self-luminous substance. 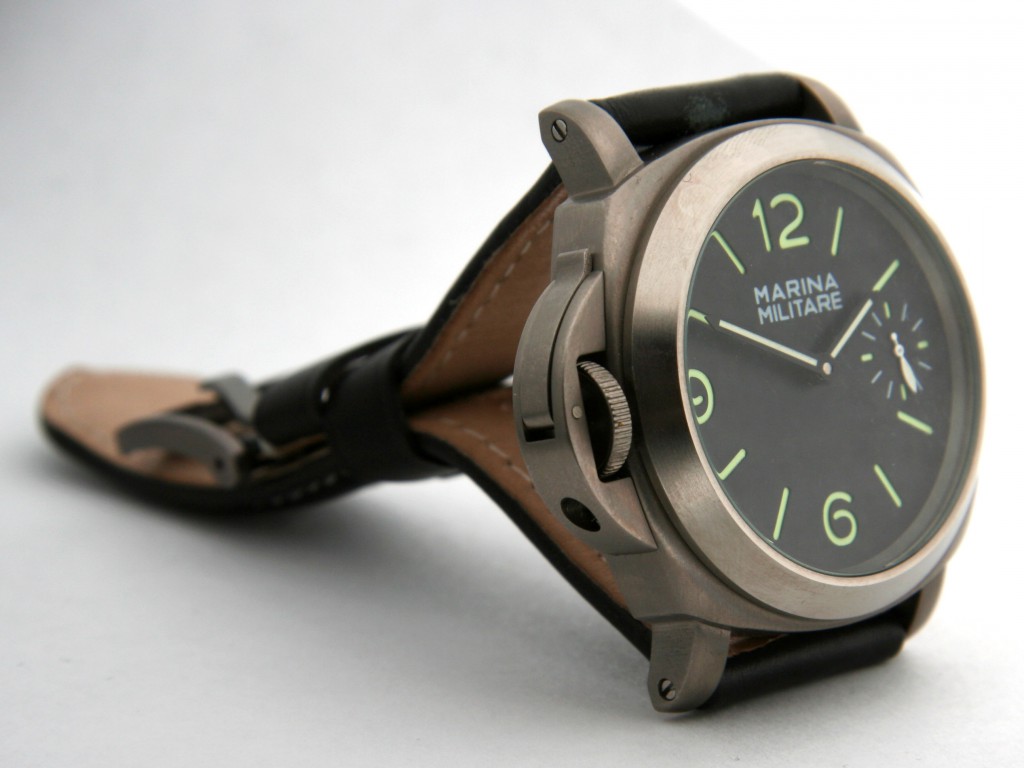 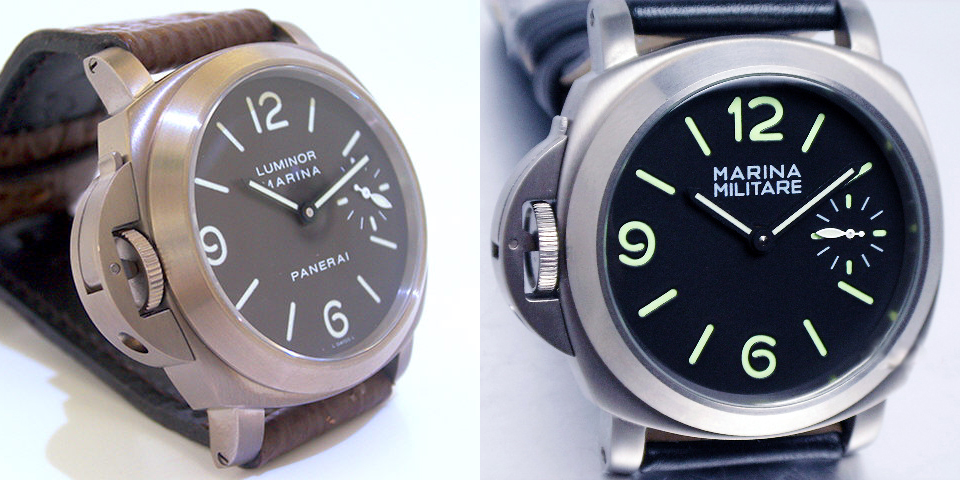 In 1956, Panerai released the Panerai Radiomir Egiziano for the Egyptian Navy. The watch’s diameter was, and still is today a whopping 60mm! A huge watch!

Iconic and legendary Hollywood action movie actor Arnold Schwarzenegger has been spotted a few times with a modern version of the famous Panerai Egiziano. Even the modern version is a low tech watch by modern standards – it’s a mechanical hand wind watch.

Below: a disassembled Panerai Egiziano. 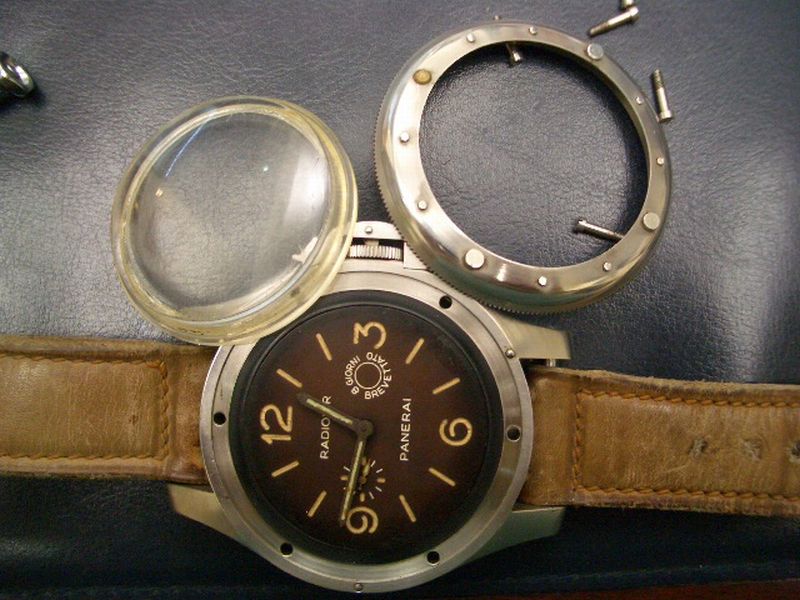 In 1972, Giuseppe Panerai died, the management of the family business (and the contracts with the Italian Navy) went to the Italian engineer Dino Zei. He renamed the compamy “G.Panerai & Figlio” to “Officine Panerai”. The same year, Panerai started developing wrist compasses and wrist depth gauges.

In 1980, the company developed a prototype titanium divers watch with a water resistance of 1000 meters.

In 1993, Panerai released its first Officine Panerai Collection intended for the civilian market. These were collectible watches that paid homage to the legendary Panerai Luminor Marina and the Panerai Mare Nostrum watches. These were highly sought after watches by enthusiasts and collectors.

In 1995, the iconic Hollywood action movie star Sylvester Stallone requested Panerai to create a special collection of Panerai watches called SlyTech. The limited edition consisted of 200 timepieces only. Sylvester Stallone can be given a lot of credit for reviving, this at the time, dormant Italian wristwatch brand.

In 1997, Panerai was purchased by Swiss Richemont Group and thus became an important player in the Swiss luxury watch market. Since the late 1990s, you can truly say that the brand ceased to be Italian and became Swiss.

In 2002, the legendary watch manufacturer opened its manufacture in Neuchâtel in Switzerland. The same year, in 2002, the brand released its first in-house made movement called Panerai in-house movement P. 2002.

A Review of Officine Panerai’s mission 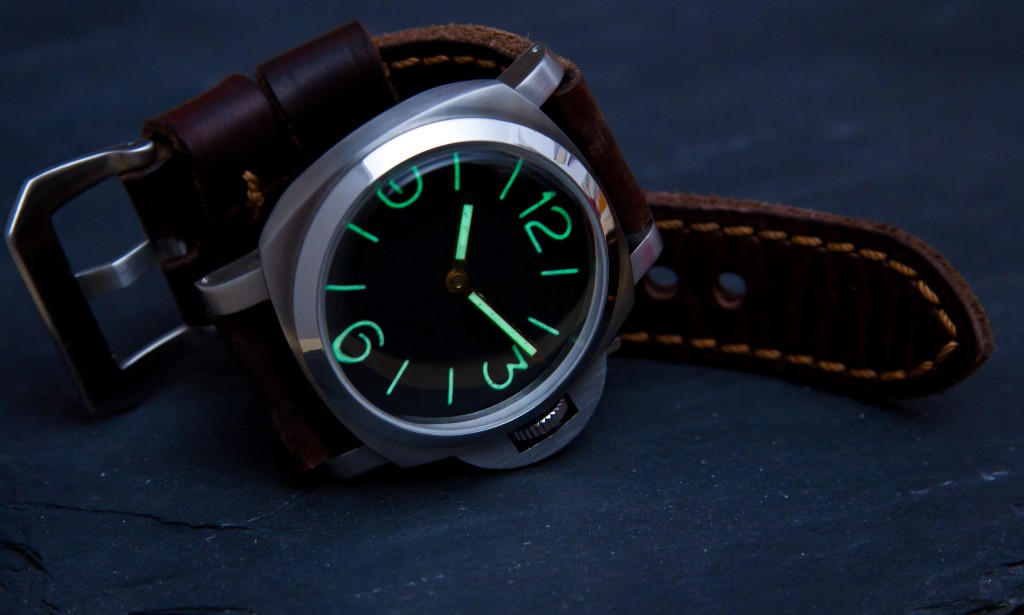 Panerai is dedicated to the purpose of developing and manufacturing collectible cult watches on a very limited scale, in order to honor Panerai’s history.

A Review of Officine Panerai’s manufacture 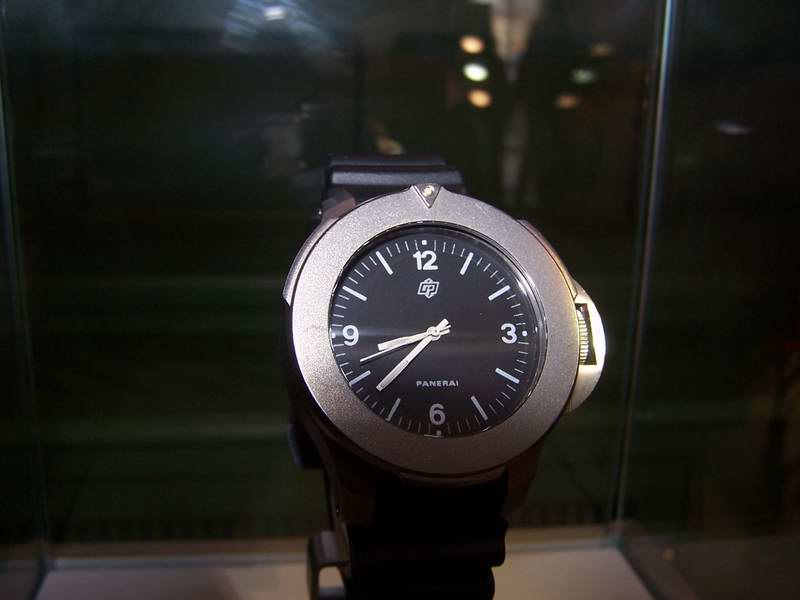 Panerai was originally an Italian brand as its name and history suggest, however today the watches are manufactured in Neuchâtel in Switzerland, and Panerai is owned today by Swiss Richemont Group.

Panerai’s very first in-house made movement is the Panerai P. 2002. which was released in 2002.

Like many other Swiss luxury brands, their watches start as concepts – they start with developing computer based prototypes, which then lead to the production stage, movement assembly and finally the quality control.

Panerai’s watches are rarely, if ever, chronometer certified, and the brand rarely makes any chronographs or complications.

Down below: a typical simplistic Panerai dial. Please note the domed glass, the lack of a date function, and the lack of a second hand. 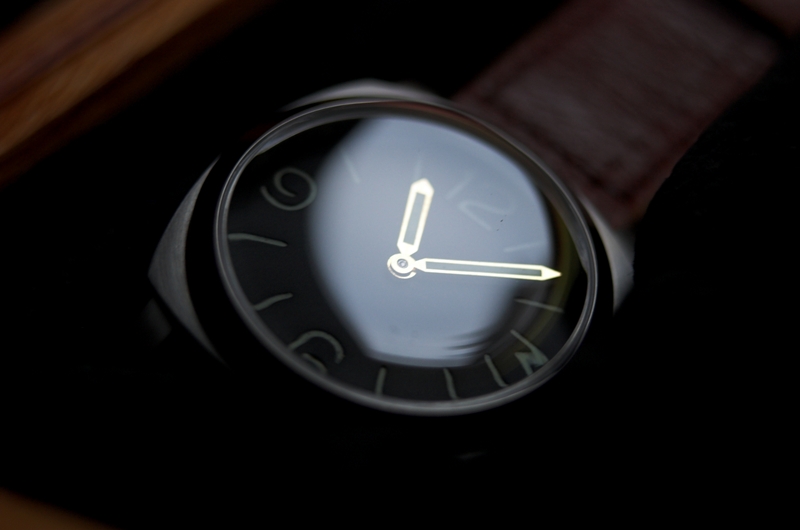 Panerai sticks to the basics of the basics: Hour-, and minute hands, and a small second hand on a subdial, and a date function. Very often, Panerai does not even offer a second hand and a date window! A large percentage of Panerai’s watches, are actually manually hand wound mechanical watches! 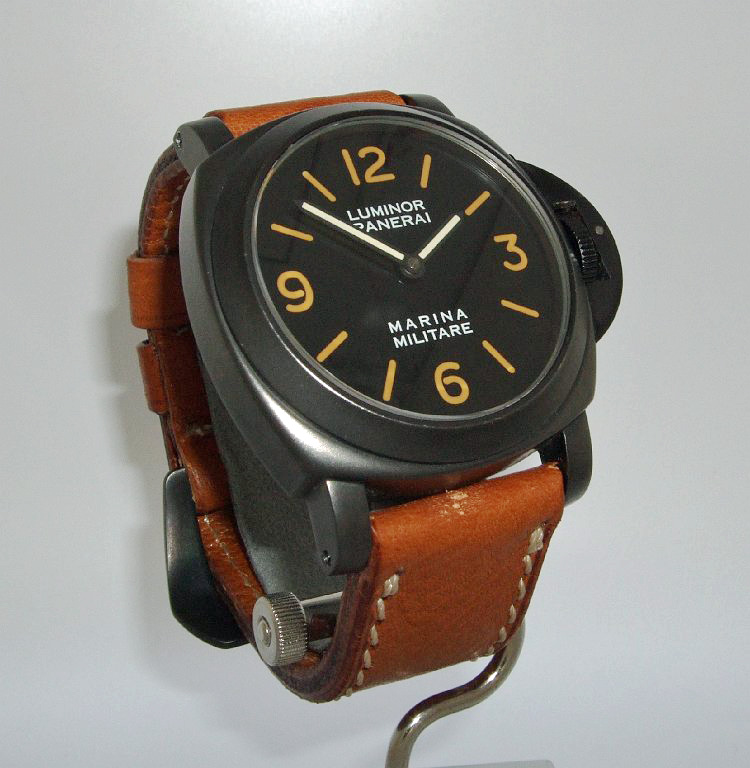 The manufacture of a Panerai watch’s components, case and movement, is mostly computerized and automated, while the assembly of the watch is done mostly by hand. As far as manufacture is concerned, Panerai cannot in any way shape or form be compared to say Patek Philippe, Vacheron Constantin, Audemars Piguet, Jaeger LeCoultre, Blancpain or Breguet. As far as these brands are concerned, most aspects of the manufacture process is being done by hand.

Panerai watches are less anti-magnetic than Rolex and Omega, and Panerai’s movements aren’t as accurate as Omega and Rolex. Panerai doesn’t use screw down crowns like most Swiss brands, which means Panerai’s water resistance isn’t really comparable to that of say Rolex, Breitling and Omega.

Instead, Panerai uses a massive external crown protector, where the lever keeps the crown in the desired water resistance position. Please note: the crown protector only exists on Luminor Marina and Luminor Submersible – not on the Radiomir collection.

Below: an example of an archetypical external Panerai crown protector. 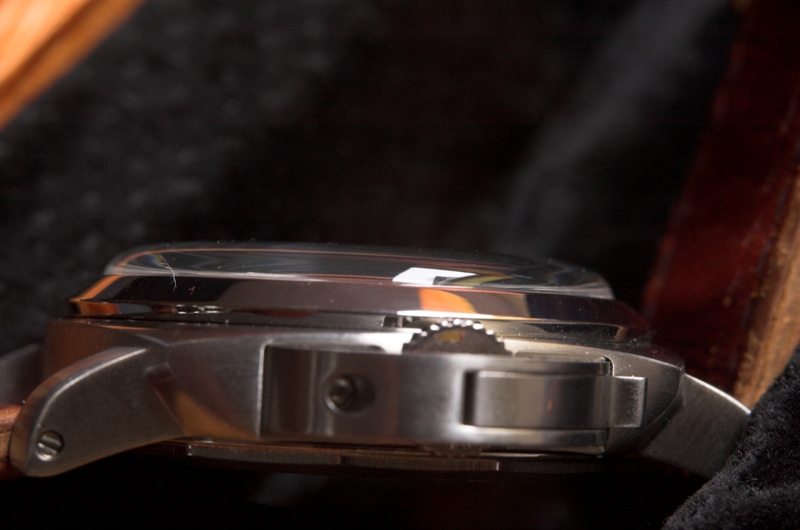 A Review of Officine Panerai’s movements 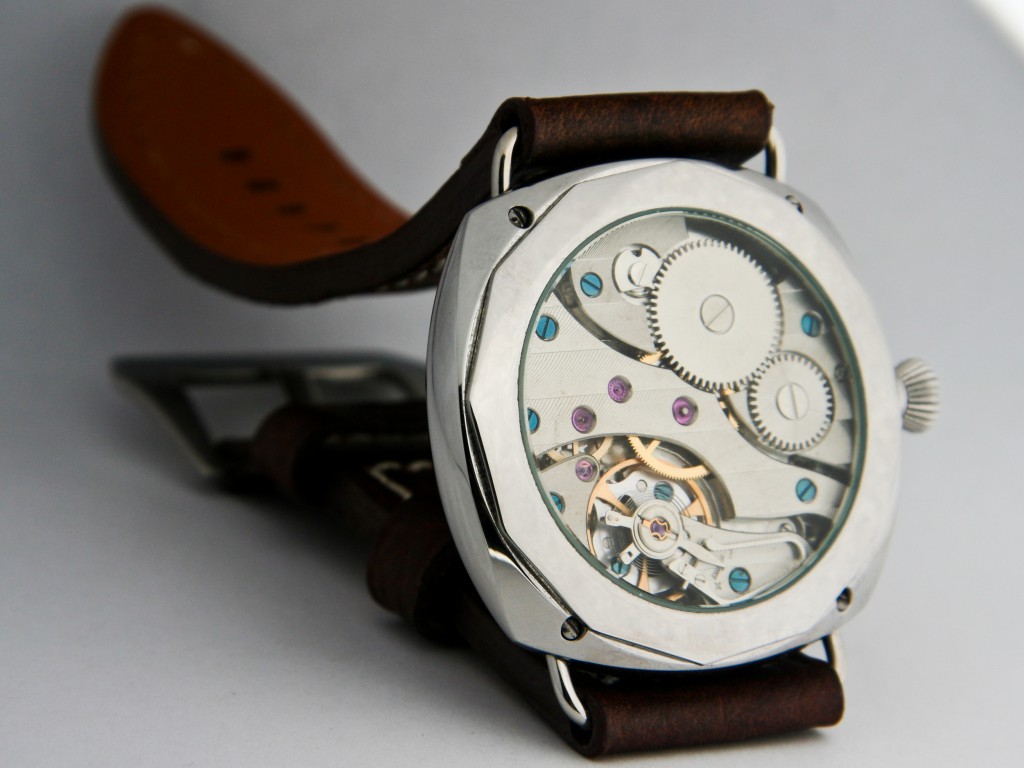 The first Panerai in-house movements were released in 2002. Some of Panerai’s movements are in-house made but most movements utilised by Panerai are actually generic and commonly used ETA/Valjoux movements from Swatch Group.

This is interesting, since the Swatch Group is a competitor of Panerai’s owner – the Richemont Group. Panerai is absolutely a prestigious brand, but you would expect this prestigious brand to have more in-house movements, to warrant their high prices!

A Review of Officine Panerai’s reputation 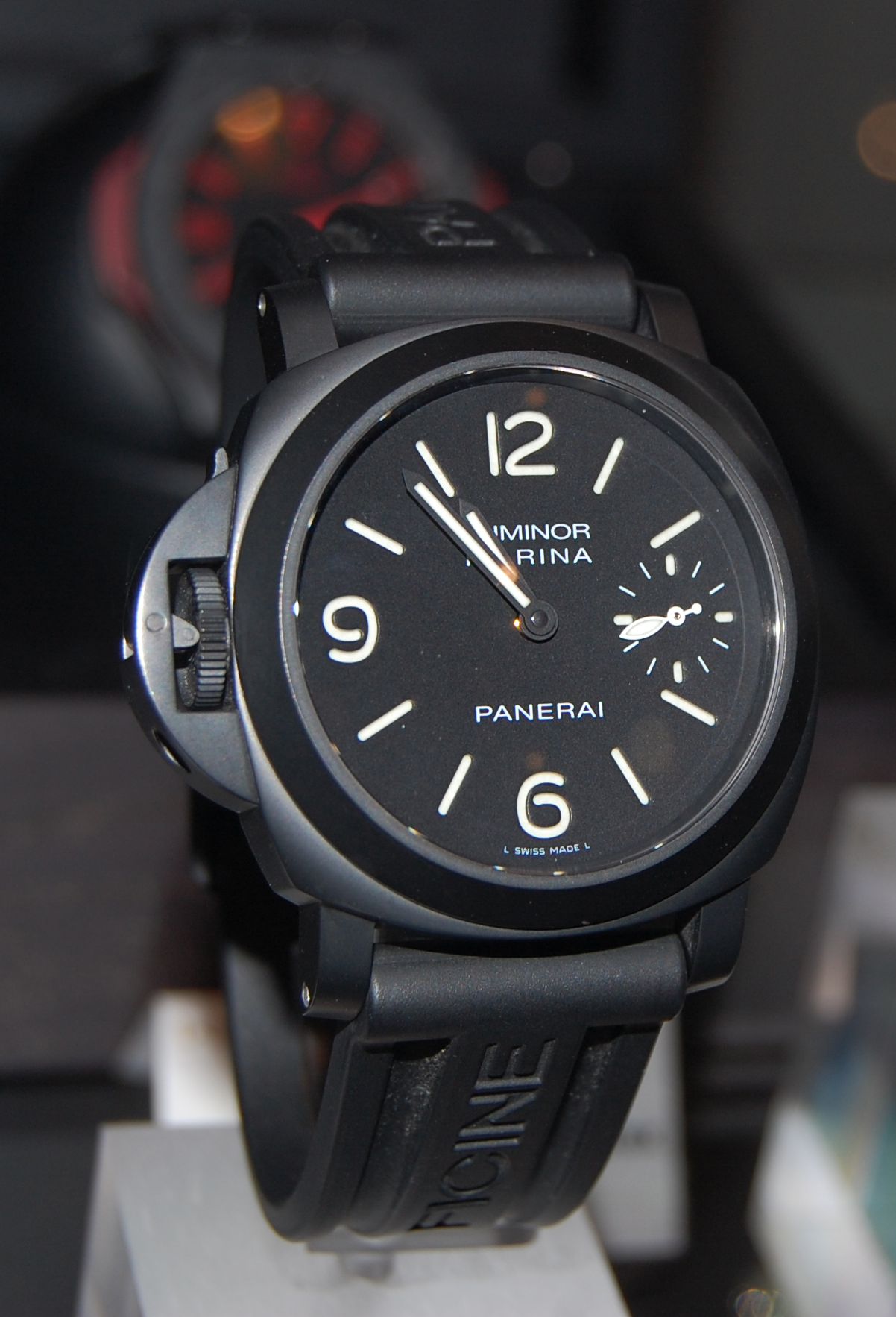 Panerai is an old Italian luxury wristwatch brand which was established in Florence, Italy, in 1860. The name Panerai, is derived from its Italian founder – Giovanni Panerai. The Panerai brand was pretty much out of business between the 1950s and 1997, when it was purchased by the Swiss Richemont Group, and was revived as a cult watch brand which honors the history of the Panerai brand. The brand combines Swiss technology with Italian design – the true trademark of Officine Panerai.

Today, Panerai is owned by Swiss Richemont Group, so in similarity to most Swiss luxury wristwatch brands, this isn’t an independent watchmaker.

Among watch enthusiasts and collectors, Panerai is a well known brand, although the brand may not be very well known to most people. If you want a very rare brand – this is definitely the right choice! 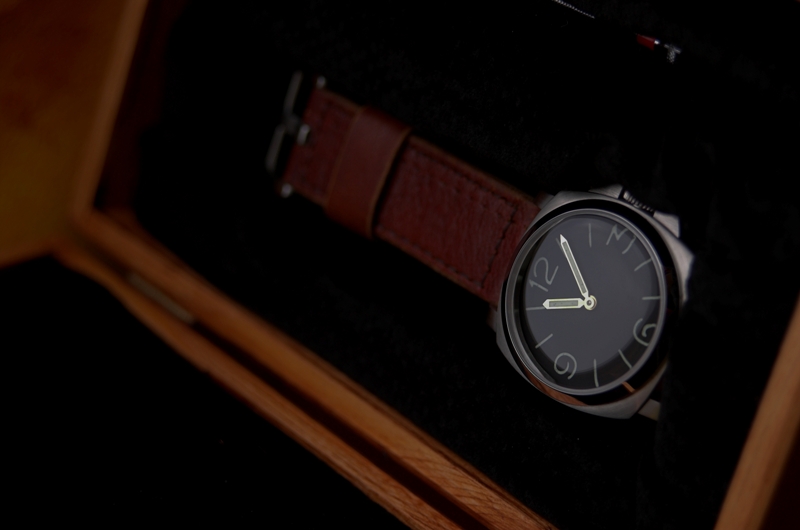 Panerai is known for making limited editions of several collections and turning them into collectible timepieces. This might interest you if you are a watch collector!

Today, most movements used by Panerai are actually ETA/Valjoux movements – even though Panerai did start making in-house movements in 2002. Panerai isn’t famous for complications, chronographs or higher watch making. The brand likes to stick to the basic time functions – and sometimes not even a second hand or a date function!

What do I think of Panerai’s in-house movements?

What do I think of Panerai’s ETA/Valjoux movements? 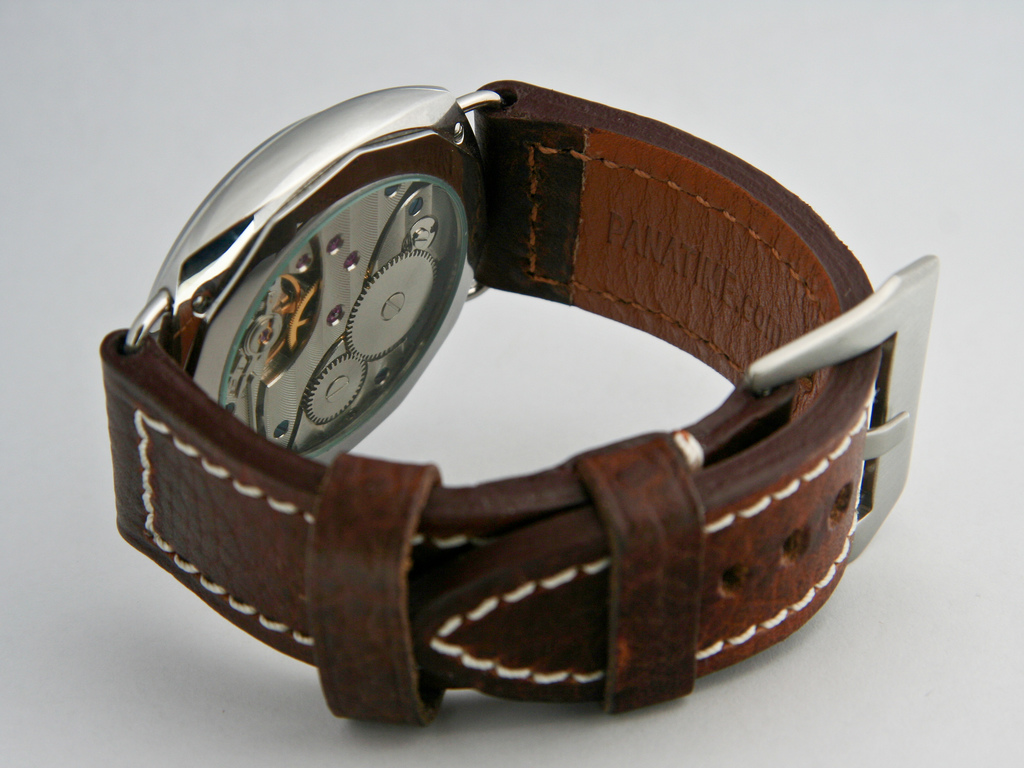 What is Panerai famous for? A few things come to my mind: 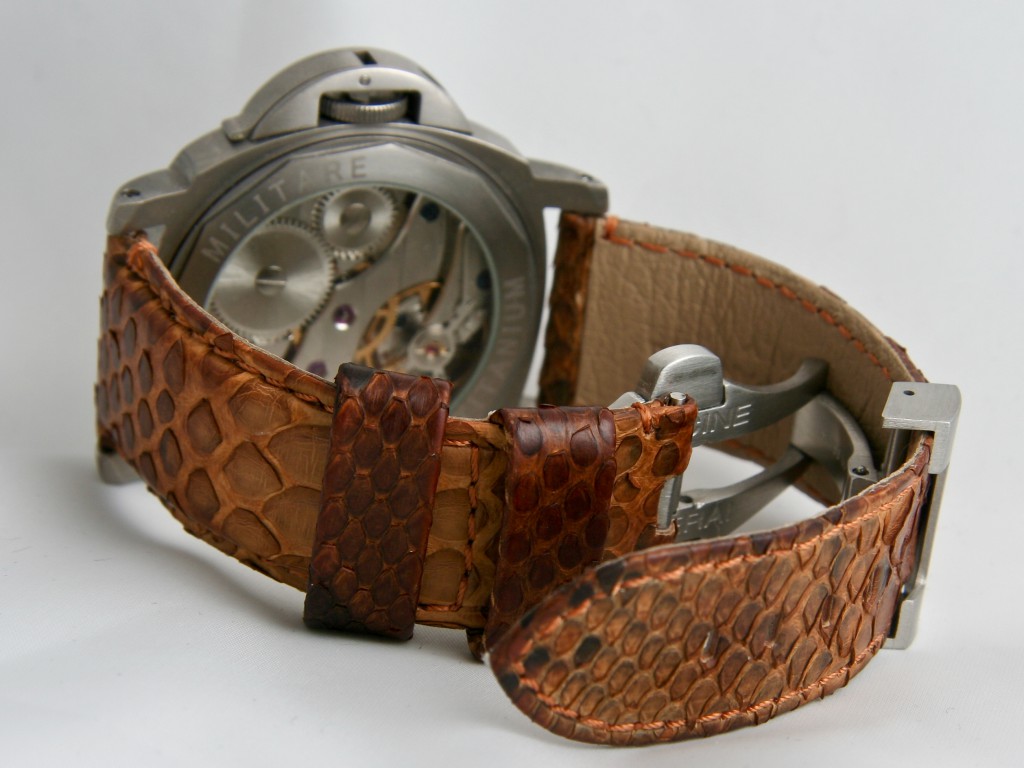 Personally, I do think that Panerai watches are way overpriced considering the fact that they mostly employ ETA/Valjoux movements (procured from Swatch Group – a competitor of Panerai’s owner Richemont Group!), Panerai rarely makes their own movements and rarely places those in-house made movements in their watches. Panerai rarely makes any movement complications or chronographs, and their watches and dials are just equipped with the bare essentials. 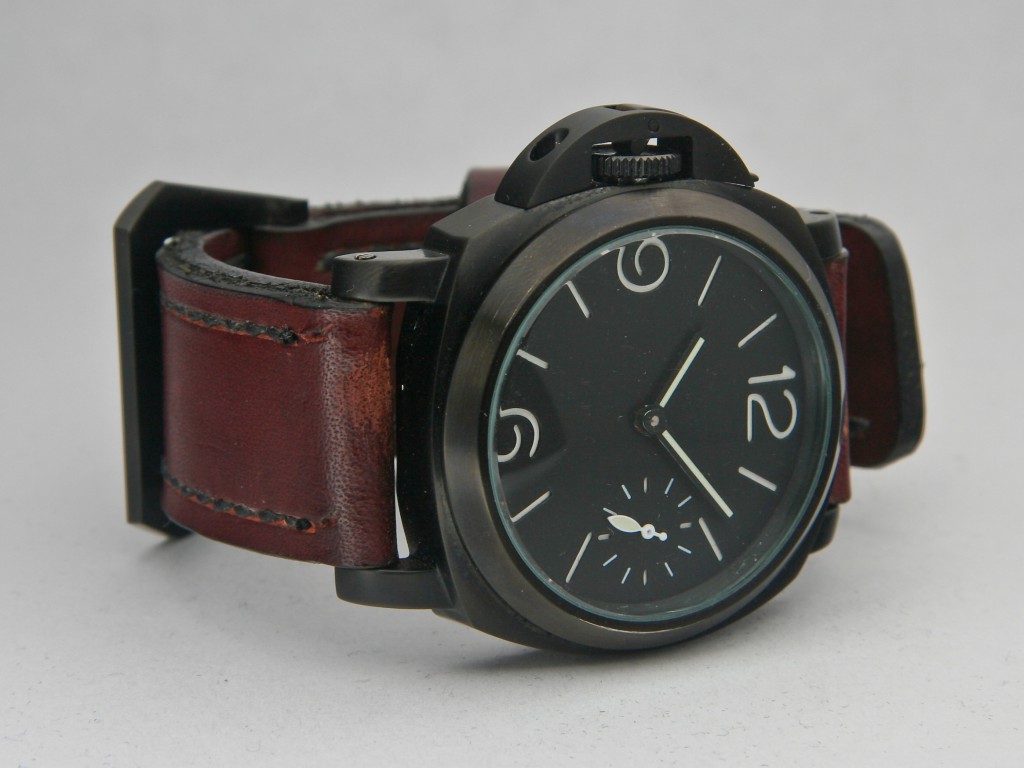 But if Panerai rarely makes their own movements, rarely makes any complications and if their watches and dials are usually just equipped with the bare essentials, then why exactly are Panerai watches so expensive?

I would say that the main reason why Panerai watches are so expensive, is the first reason – reason nr 1: Panerai is expensive because Panerai deliberately manufactures a very small volume of collectible sought after cult watches. A small supply and a large demand leads to high prices, irrespective of the commercial product’s true quality. 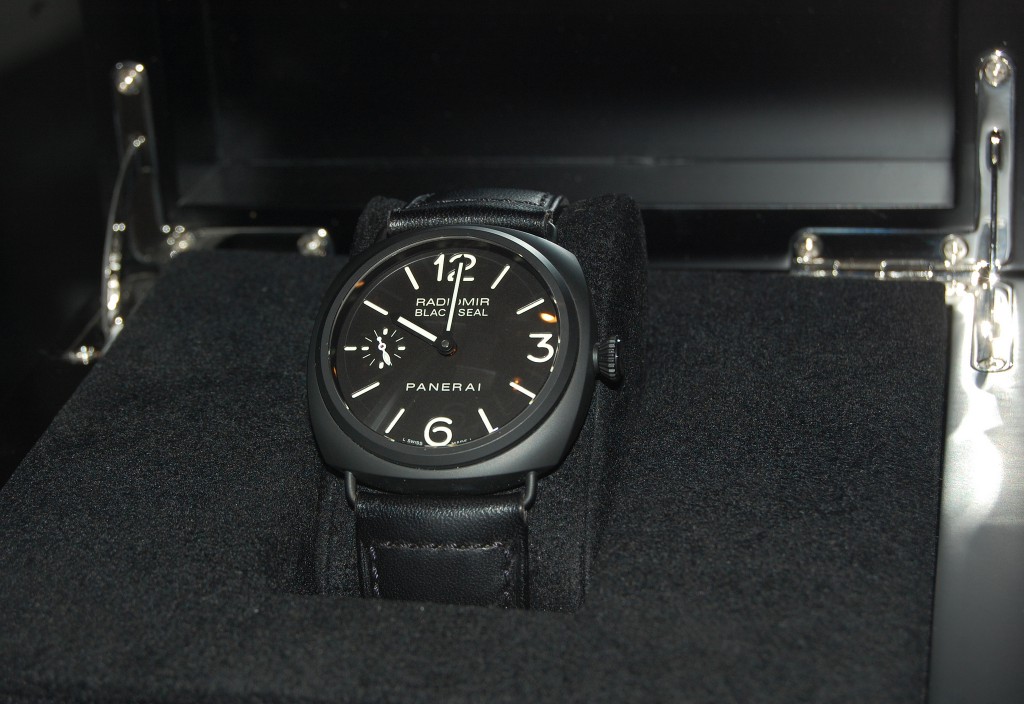 You would essentially buy Panerai watches because:

The Panerai Luminor Marina Collection is water resistant but lacks a diver’s bezel – they are mainly suitable for swimming and snorkeling despite that some of them have a 300 m water resistance. The Luminor Collection dates back to the 1940s.

The Panerai Luminor Submersible Collection is the real divers watch collection equipped with diving functions – such as a diver’s bezel. The Luminors date back to the 1940s.

Panerai is a very niche specific luxury watch brand – it only appeals to a certain taste. If the description of the brand appeals to you, you might fall in love with Officine Panerai.

A Review of Officine Panerai’s ranking

My ranking of Panerai: 14th. 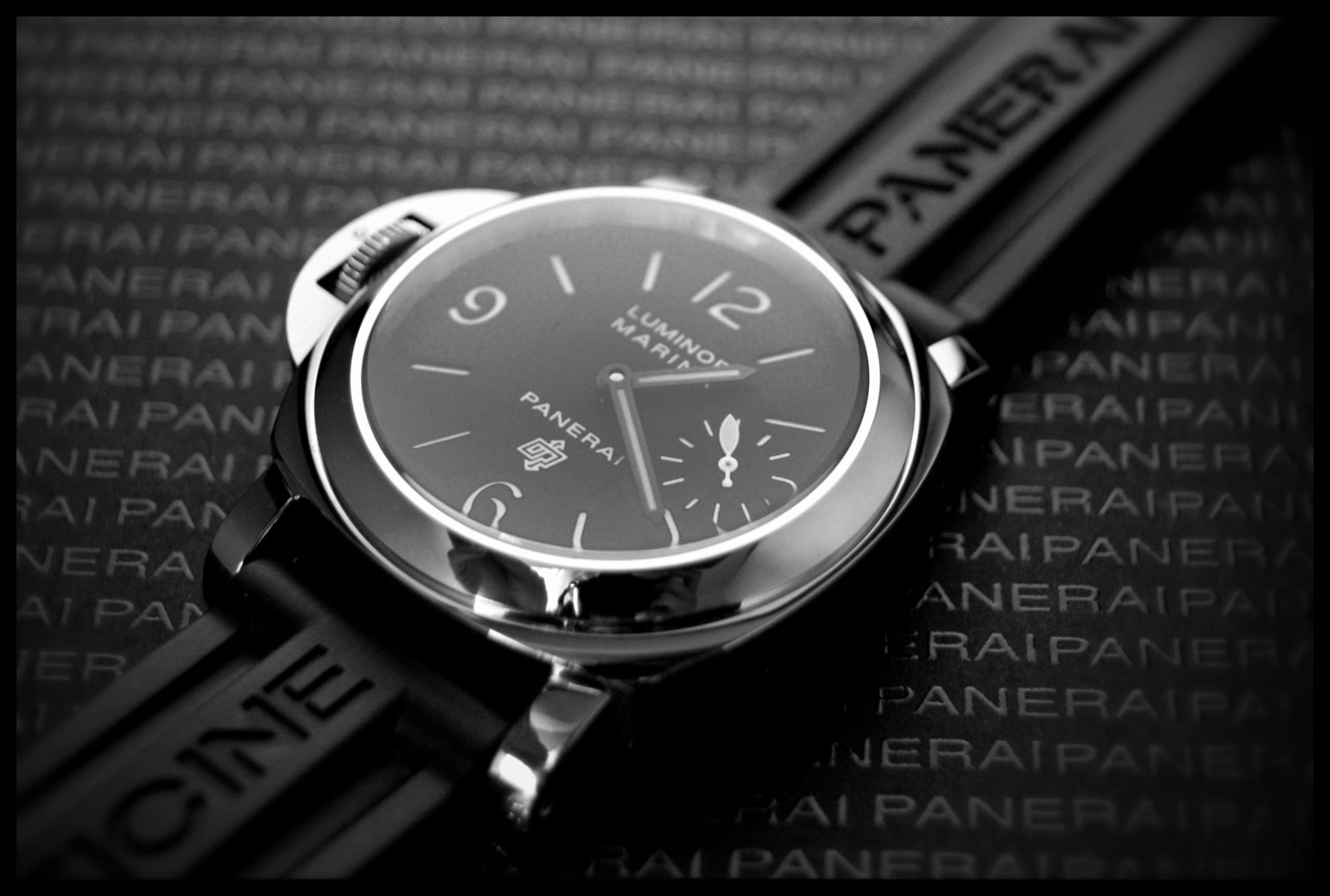